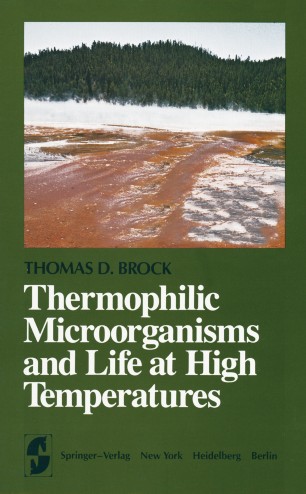 Part of the Springer Series in Microbiology book series (SSMIC)

From 1965 through 1975, I conducted an extensive field and laboratory research project on thermophilic microorganisms. The field work was based primarily in Yellowstone National Park, using a field laboratory we set up in the city of W. Yellowstone, Montana. The laboratory work was carried out from 1965 through 1971 at Indiana University, Bloomington, and subsequently at the University of Wisconsin, Madison. Although this research project began small, it quickly ramified in a wide variety of directions. The major thrust was an attempt to understand the ecology and evolutionary relationships of thermophilic microorganisms, but research also was done on biochemical, physiologic, and taxonomic aspects of thermophiles. Four new genera of thermophilic microorganisms have been discovered during the course of this 10-year period, three in my laboratory. In addition, a large amount of new information has been obtained on some thermophilic microorganisms that previously had been known. In later years, a considerable amount of work was done on Yellowstone algal­ bacterial mats as models for Precambrian stromatolites. In the broadest sense, the work could be considered geomicrobiological, or biogeochemi­ cal, and despite the extensive laboratory research carried out, the work was always firmly rooted in an attempt to understand thermophilic microorga­ nisms in their natural environments. Indeed, one of the prime motivations for initiating this work was a view that extreme environments would provide useful models for studying the ecology of microorganisms. As a result of this 10-year research project, I published over 100 papers.