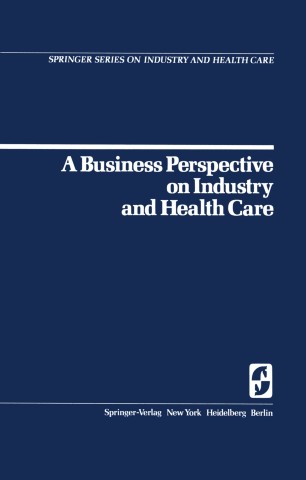 A Business Perspective on Industry and Health Care

The Springer Series on Industry and Health Care is intended to character­ ize present and future ways in which industry can influence the nation's health care system in the direction of greater efficiency and effectiveness. Its potential audience includes nearly everyone interested in health care because the sys­ tem's future configuration is now being influenced by corporate health pro­ grams and the involvement of individual corporate leaders in health affairs. The first volume of the Springer Series provided a broad background on industry as a payer, provider, and consumer of health services. Unlike volumes planned for the future, it did not single out any particular aspect of corporate activity in health but rather identified and catalogued the many new involve­ ments of industry, both management and labor, in the health care scene. This, the second volume in the series, is designed to complement the first and to complete the process of laying the groundwork for the series as a whole. Volume two covers the same vista as volume one, but paints with a broader brush. It seemed to us, as editors of the series and authors of volume one, that the academic and somewhat distant overview we provided could be rounded out in a second volume by someone with a more immediate and practical perspective on industry's involvement in health care.