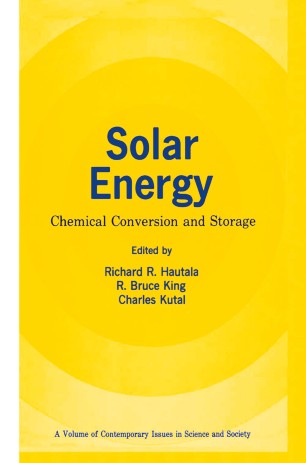 The intense current interest in the development of solar energy as a viable energy alternative comes as no surprise in view of the widespread awareness of impending world-wide energy shortages. After all, the magnitude of energy available from the sun is impressive, its diffuseness and intermittent nature notwithstanding. The fact that, as a source, it represents a constant and inex­ haustible supply of energy is alluring. The fact that most solar application schemes are nonpolluting in nature is an attractive bonus. In spite of these impressive attributes, research and development in the area of solar energy is in its infancy, owing largely to the prior lack of any need to exploit such diffuse sources. Indeed efforts in this area have traditionally been within the province of solid-state physics and engineering. The problems associated with efficient light harvesting and storage, however, are not simply technological ones. Effec­ tive solutions to these problems appear to lie beyond the current forefront of the chemical sciences. Consequently input fr9m scientists previously engaged in fundamental chemistry has begun to emerge. Thus many of the contributions in this volume represent input from research groups with a relatively short history of involvement in solar energy. On the other hand, the long-standing and perceptive commitment of Professor Melvin Calvin to research involving solar energy represents the other extreme. This volume covers a variety of approaches to the problem of efficiently converting and storing solar energy.