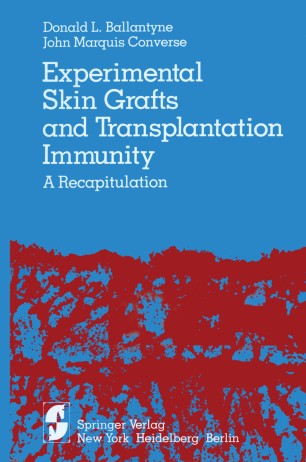 The skin allograft has been used as the test tool since the beginning of investiga­ tions of the fate of skin transplanted between two individuals of ordinary genetic diversity. This monograph is designed to furnish the transplantation work­ er with a review of the significant papers in which skin allografts and xeno­ grafts, applied to experimental animals and man, have played a role in acquiring a body of knowledge concerning the behavior and fate of these transplants and the reaction of the body to their presence. Skin, an essential organ for survival, a barrier between the "milieu inte­ rieur" of Claude Bernard and the "milieu exterieur," will remain the most frequently used transplant in transplantation research. Because it is highly antigenic, the final solution of the problem of acceptance of allografts of various tissues and organs will probably depend upon the achievement of a permanent survival of skin allografts. My personal interest in transplantation, which originated during my surgi­ cal training, was rekindled when I met Peter Medawar (today Sir Peter) in England during World War II. I had joined, in 1940, an American Volunteer Surgical Unit (The American Hospital in Britain), organized and headed by Dr.