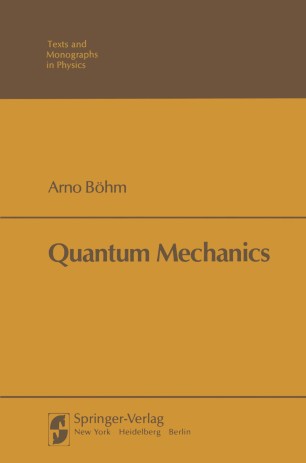 Part of the Texts and Monographs in Physics book series (TEMP)

This book was written as a text, although many may consider it a mono­ graph. As a text it has been used several times in both the one-year graduate quantum-mechanics course and (in its shortened version) in a senior quantum mechanics course that I taught at the University of Texas at Austin. It is self-contained and does not require any prior knowledge of quantum mechanics. It also introduces the mathematical language of quantum mechanics, starting with the definitions, and attempts to teach this language by using it. Therefore, it can, in principle, be read without prior knowledge of the theory of linear operators and linear spaces, though some familiarity with linear algebra would be helpful. Prerequisites are knowledge of calculus and of vector algebra and analysis. Also used in a few places are some elementary facts of Fourier analysis and differential equations. Most physical examples are taken from the fields of atomic and molecular physics, as it is these fields that are best known to students at the stage when they learn quantum mechanics. This book may be considered a monograph because the presentation here is different from the usual treatment in many standard textbooks on quantum mechanics. It is not that a "different kind" of quantum mechanics is pre­ sented here; this is conventional quantum mechanics (" Copenhagen inter­ pretation ").