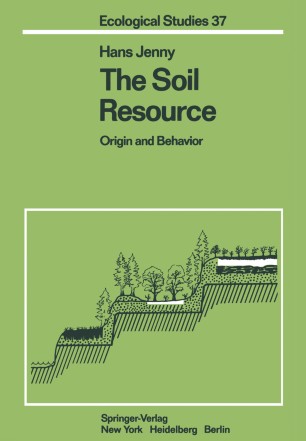 change is simply described by the rate of income and rate of loss. Our home's energy budget, our firm's inventory, our nation's debt, and humanity's numbers all have accounts that change at rates that are equal to the inputs minus the outputs. Jenny's "system view" of the soil was carried into the fertile fields of Midwestern American prairies from the laboratories of Switzerland in the late 1920s. Jenny's rate equations provided the other paradigm or world view that, I recall, brought us to the threshold of systems ecology as it later evolved in the second half of the twentieth century. As if world renown in the specialties of pedology and soil chemistry were not enough for one lifetime, excerpts below remind us that Hans Jenny has also been a perceptive outdoor field ecologist since his early Alpine expeditions with Braun­ Blanquet in the mid 1920s. Jenny's ecosystem studies in the pygmy forest, a further classic example of a soil-plant system "run down" over hundreds of thousands of years since its origin, continue to occupy some of the vigorous retirement time near his farm in Mendocino County. But each specific, quantitative case study, and each research area conserved (with additional hard work) for further study by future generations, fits into Jenny's coherent world view. It is that view, and its legacies of discovery and of tangible landscape preserves, which we are privileged to share with their originator in this volume.