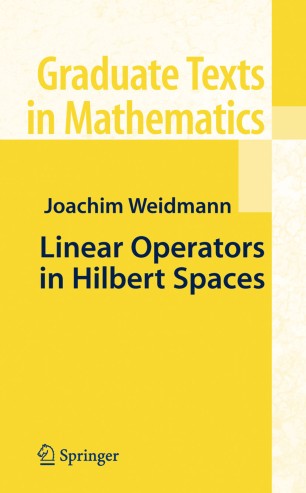 This English edition is almost identical to the German original Lineare Operatoren in Hilbertriiumen, published by B. G. Teubner, Stuttgart in 1976. A few proofs have been simplified, some additional exercises have been included, and a small number of new results has been added (e.g., Theorem 11.11 and Theorem 11.23). In addition a great number of minor errors has been corrected. Frankfurt, January 1980 J. Weidmann vii Preface to the German edition The purpose of this book is to give an introduction to the theory of linear operators on Hilbert spaces and then to proceed to the interesting applica­ tions of differential operators to mathematical physics. Besides the usual introductory courses common to both mathematicians and physicists, only a fundamental knowledge of complex analysis and of ordinary differential equations is assumed. The most important results of Lebesgue integration theory, to the extent that they are used in this book, are compiled with complete proofs in Appendix A. I hope therefore that students from the fourth semester on will be able to read this book without major difficulty. However, it might also be of some interest and use to the teaching and research mathematician or physicist, since among other things it makes easily accessible several new results of the spectral theory of differential operators.