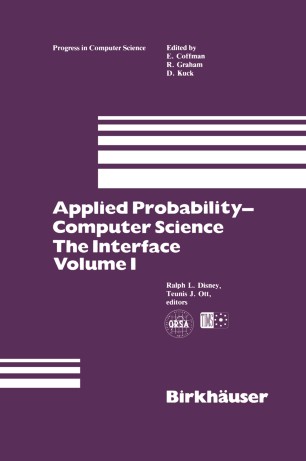 These two volumes are the Proceedings of the first special interest meeting instigated and organized by the joint Technical Section and College in Applied Probability of ORSA and THlS. This meeting, which took place January 5-7, 1981 at Florida Atlantic University in Boca Raton, Florida, had the same name as these Proceedings: Applied Probability-Computer Science, the Interface. The goal of that conference was to achieve a meeting of, and a cross fertilization between, two groups of researchers who, from different starting points, had come to work on similar problems, often developing similar methodologies and tools. One of these groups are the applied probabilists, many of whom consider their field an offspring of mathematics, and who find their motivation in many areas of application. The other is that group of computer scientists who, over the years, have found an increasing need in their work for the use of probabilistic models. The most visible area of common methodology between these two groups is networks of queues, Hhich by itself could have been the theme of an entire conference. FunctionQl areas which are, or are becoming, sources of exciting problems are computer performance analysis, data base analysis, analysis of communication protocols, data networks, and mixed voice-data telephone networks. The reader can add to this list by going through the papers in these Proceedings.