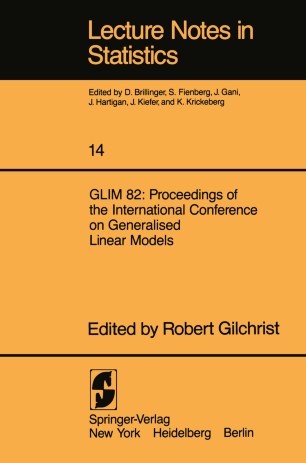 GLIM 82: Proceedings of the International Conference on Generalised Linear Models

This volume of Lecture Notes in Statistics consists of the published proceedings of the first international conference to be held on the topic of generalised linear models. This conference was held from 13 - 15 September 1982 at the Polytechnic of North London and marked an important stage in the development and expansion of the GLIM system. The range of the new system, tentatively named Prism, is here outlined by Bob Baker. Further sections of the volume are devoted to more detailed descriptions of the new facilities, including information on the two different numerical methods now available. Most of the data analyses in this volume are carried out using the GLIM system but this is, of course, not necessary. There are other ways of analysing generalised linear models and Peter Green here discusses the many attractive features of APL, including its ability to analyse generalised linear models. Later sections of the volume cover other invited and contributed papers on the theory and application of generalised linear models. Included amongst these is a paper by Murray Aitkin, proposing a unified approach to statistical modelling through direct likelihood inference, and a paper by Daryl Pregibon showing how GLIM can be programmed to carry out score tests. A paper by Joe Whittaker extends the recent discussion of the relationship between conditional independence and log-linear models and John Hinde considers the introduction of an independent random variable into a linear model to allow for unexplained variation in Poisson data.