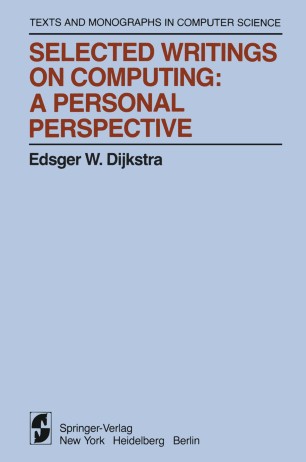 Since the summer of 1973, when I became a Burroughs Research Fellow, my life has been very different from what it had been before. The daily routine changed: instead of going to the University each day, where I used to spend most of my time in the company of others, I now went there only one day a week and was most of the time -that is, when not travelling!- alone in my study. In my solitude, mail and the written word in general became more and more important. The circumstance that my employer and I had the Atlantic Ocean between us was a further incentive to keep a fairly complete record of what I was doing. The public part of that output found its place in what became known as "the EWD series", which can be viewed as a form of scientific correspondence, possible since the advent of the copier. (That same copier makes it hard to estimate its actual distribution: I myself made about two dozen copies of my texts, but their recipients were welcome to act as further nodes of the distribution tree. ) The decision to publish a se1ection from the EWD series in book form was at first highly embarrassing, but as the months went by I got used to the idea. As soon as some guiding principles had been adopted -preferably not published elsewhere, as varied and as representative as possible, etc.