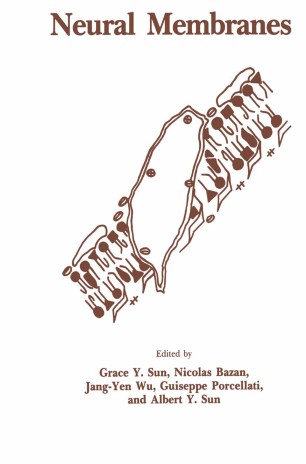 Part of the Experimental and Clinical Neuroscience book series (ECN)

One of the most active and productive areas of biological science in the past decade has been the study of the biochemical and biophysical prop­ erties of cell membranes. There is little doubt that membranes are essen­ tial components of all cellular systems and that each type of membrane manifests specific and characteristic cellular functions. In the nervous system, important events such as neurotransmission, receptor binding, ion transport, axonal transport, and cell uptake are all known to take place within the neural cell membrane. Phospholipids, one of the major components of membranes, not only provide the membrane with its structural integrity and physical proper­ ties, but also play an important role in regulating membrane function. Attention has recently been focused on the asymmetric localization of these molecules, the identification of discrete metabolic pools of phospholipids within the membrane matrix, and their involvement in sig­ nal transmission. Although synaptic membranes generally lack an active mechanism for the de novo biosynthesis of phospholipids, a number of enzymic routes are present for their interconversions and for facilitating metabolic turnover. Metabolites generated during the interconversion reactions may also exert a great influence in modulating membrane func­ tions. The phosphogylcerides of neural membranes are especially enriched in polyunsaturated fatty acids. However, only very small amounts of these fatty acids are present in the free form, and they are maintained in dynamic equilibrium with the membrane phospholipids.