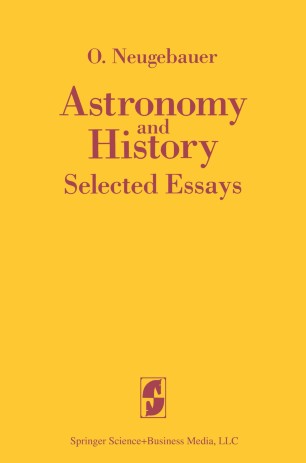 The collection of papers assembled here on a variety of topics in ancient and medieval astronomy was originally suggested by Noel Swerdlow of the University of Chicago. He was also instrumental in making a selection* which would, in general, be on the same level as my book The Exact Sciences in Antiquity. It may also provide a general background for my more technical History of Ancient Mathematical Astronomy and for my edition of Astronomi­ cal Cuneiform Texts. Several of these republished articles were written because I wanted to put to rest well-entrenched historical myths which could not withstand close scrutiny of the sources. Examples are the supposed astronomical origin of the Egyptian calendar (see [9]), the discovery of precession by the Babylonians [16], and the "simplification" of the Ptolemaic system in Copernicus' De Revolutionibus [40]. In all of my work I have striven to present as accurately as I could what the original sources reveal (which is often very different from the received view). Thus, in [32] discussion of the technical terminology illuminates the meaning of an ancient passage which has been frequently misused to support modern theories about ancient heliocentrism; in [33] an almost isolated instance reveals how Greek world-maps really looked; and in [43] the Alexandrian Easter computus, held in awe by many historians, is shown from Ethiopic sources to be based on very simple procedures.