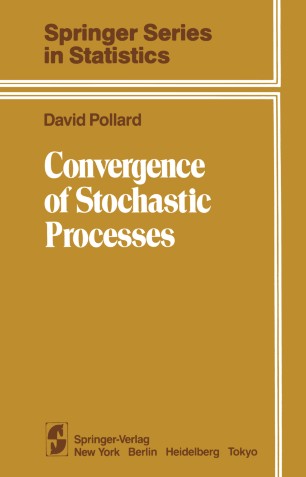 A more accurate title for this book might be: An Exposition of Selected Parts of Empirical Process Theory, With Related Interesting Facts About Weak Convergence, and Applications to Mathematical Statistics. The high points are Chapters II and VII, which describe some of the developments inspired by Richard Dudley's 1978 paper. There I explain the combinatorial ideas and approximation methods that are needed to prove maximal inequalities for empirical processes indexed by classes of sets or classes of functions. The material is somewhat arbitrarily divided into results used to prove consistency theorems and results used to prove central limit theorems. This has allowed me to put the easier material in Chapter II, with the hope of enticing the casual reader to delve deeper. Chapters III through VI deal with more classical material, as seen from a different perspective. The novelties are: convergence for measures that don't live on borel a-fields; the joys of working with the uniform metric on D[O, IJ; and finite-dimensional approximation as the unifying idea behind weak convergence. Uniform tightness reappears in disguise as a condition that justifies the finite-dimensional approximation. Only later is it exploited as a method for proving the existence of limit distributions. The last chapter has a heuristic flavor. I didn't want to confuse the martingale issues with the martingale facts.