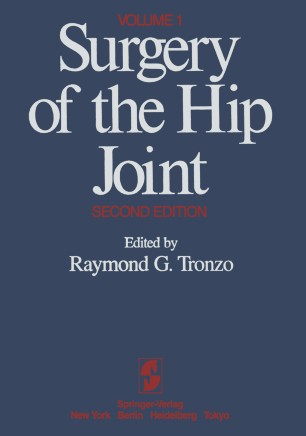 Surgery of the Hip Joint

The first edition of Surgery of the Hip Joint has had certain measures of success. Its cover won the Outstanding A ward for art at a publishers trade show. A year later it was translated into Spanish for exposure to the vast world of the Spanish speaking peoples. As I traveled through Europe, it was repeatedly a pleasant surprise to have the book recognized as an authoritative reference. This was a great tribute to the experts whose diligent efforts made it all possible. Apparently the book has stood the test of time to judge from the many inquiries and constructive comments made toward urging us on to write a second edition. It was not an easy task to gather another cadre of authorities to update our knowledge of the hip joint. People who have earned respected positions in their field are unavoidably burdened with a busy schedule, so a chapter in this text must be appreciated as coming from someone devoted to giving up some of his precious time for the sake of sharing his knowledge with peers and students. As we struggled along, it became obvious that the book should be divided into three volumes, because outdated concepts had to be scrapped if an up-to-date text were to be offered. Time passed so rapidly that total hip arthroplasties would not become stabilized because of a never-ending parade of implant designs with increasing bioengineering considerations.