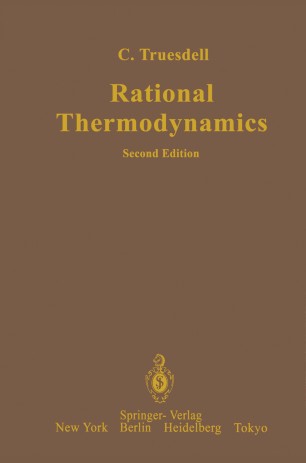 In the first edition of this book I tried to survey in brief compass the main ideas, methods, and discoveries of rational thermodynamics as it then stood, only five years after Messrs. COLEMAN & NOLL, while in Baltimore, had written the fundamental memoir that provided for the new science the one root theretofore wanting. A survey in the same style today would require an almost wholly new book, three or four times as long. As it was in 1968, again in 1983 a consecutive treatise restricted to the foundations would be premature, for at this moment they are under earnest discussion, probing analysis, and powerful attack by several students and from several directions. Because, although in the first edition I expressed some opinions I no longer hold and made some statements I should now recast or even re­ tract, it seems even yet to offer a simple introduction to some aspects of the field that remain current, I have chosen to reprint it unaltered except for emendation of slips and bettering of the English here and there.