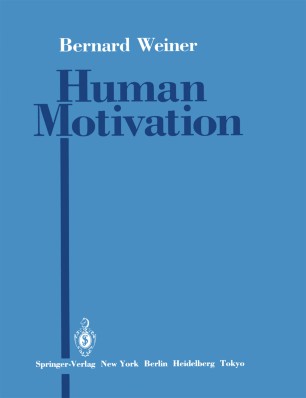 This book represents a major revision of my earlier work, Theories of Motivation: From Mechanism to Cognition. A number of shortcomings in the p,revious book became increasingly evident to me. First of all, there were serious omissions. Second, there has been much new knowl­ edge since the inception of the prior book, so that it was becoming out­ dated. And finally, I was dissatisfied with some of the writing, feeling that parts of the book were needlessly complex and that certain topics did not deserve the space that they were allotted. A revision, therefore, was initiated. I attempted to fill some of the gaps by including chapters on psychoanalytic, social learning, and humanistic theory. Furthermore, other topics that could have been dis­ cussed within the outline of Theories of Motivation but were neglected are incorporated into the present volume. These topics include, for ex­ ample, social facilitation, arousal, emotions, personal responsibility, and the irrationality of attributions. In addition to this new material, I up­ dated the ideas examined in Theories of Motivation. Little could be altered in-the sections on H ullian and Lewinian theory, for these con­ ceptions are no longer undergoing modification. The discussion of these theories was merely shortened and simplified, bringing them more in line with their current influence in psychology. But achievement and attribution theories have changed in the past years - or at least our understanding in these areas has changed - and discussion of these topics was greatly altered.