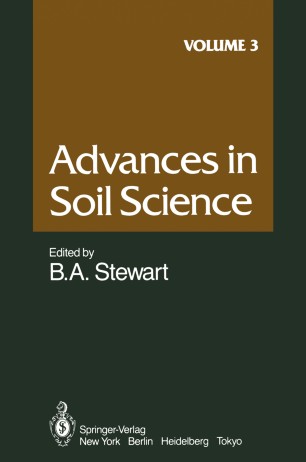 The world population in 1930 was 2 billion. It reached 3 billion in 1960, stands at 4. 6 billion today, and is expected to reach 6 billion by the end of the century. The food and fiber needs of such a rapidly increasing population are enormous. One of the most basic resources, perhaps the most basic of all, for meeting those needs is the Soil. There is an urgent need to improve and protect this resource on which the future of mankind directly depends. We must not only learn how to use the soil to furnish our immediate needs, but also ensure that the ability of the soil to sustain food production in the future is unimpaired. This is indeed a mammoth task; a 1977 United Nations survey reported that almost one-fifth of the world's cropland is now being steadily degraded. The diversity of soil makes it necessary for research to be conducted in many locations. There are basic principles, however, that are universal. This series, Advances in Soil Science, presents clear and concise reviews in all areas of soil science for everyone interested in this basic resource and man's influence on it. The purpose of series is to provide a forum for leading scientists to analyze and summarize the available scientific information on a subject, assessing its importance and identifying additional research needs. But most importantly, the contributors will develop principles that have practical applications to both developing and developed agricultures.