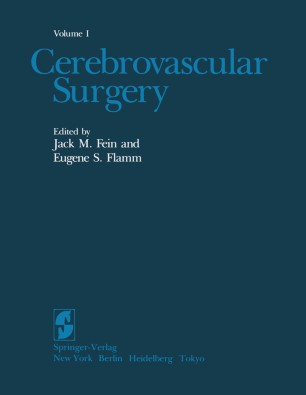 Considerable impetus was given to the study and understanding of cere­ brovascular anatomy by Thomas Willis and his contemporaries in the seventeenth century, yet almost two hundred years were to pass before further significant advances were made in this field. Then, from the mid­ nineteenth century onwards, the dark ages of cerebrovascular research gradually lifted through the efforts of such workers as Luschka, Heubner, and Windle, whose pioneering anatomical studies formed the basis of the present-day understanding of the morphology of the cerebral circulation. The turn of the century saw an increasing influence of the early neurolo­ gists in describing anatomy of cerebral vessels in relation to their areas of distribution and to the production of focal deficits through specific vascu­ lar lesions and anomalies. Later still, Padget and others made important observations concerning phylogenetic and developmental aspects of the cerebral circulation. These anatomical and clinical studies were remarkable enough but the real breakthrough in investigating cerebral pathophysiology and in devis­ ing appropriate corrective neurosurgical procedures had to await the re­ markable advances in technology of the past fifty years. These began with the advent of cerebral angiography with all its subsequent refinements and progress has been accelerated through establishing noninvasive Doppler and high resolution ultrasound imaging techniques, methods for the accu­ rate measurement of cerebral blood flow, CT scanning, PET scanning, and, most recently, imaging and metabolic NMR scanning.