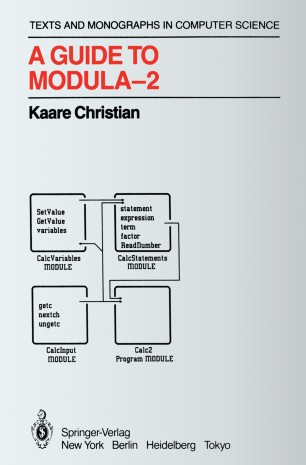 A Guide to Modula-2

Modula-2 is a simple yet powerful programming language that is suitable for a wide variety of applications. It is based on Pascal, a successful programming language that was introduced in 1970 by Niklaus Wirth. During the 1970's Pascal became the most widely taught programming language and it gained acceptance in science and industry. In 1980 Dr. Wirth released the Modula-2 program­ ming language. Modula-2 is an evolution of Pascal. It improves on the successes of Pascal while adding the MODULE - a tool for ex­ pressing the relations between the major parts of programs. In ad­ dition Modula-2 contains low-level features for systems program­ ming and coroutines for concurrent programming. Programming languages are important because they are used to express ideas. Some programming languages are so limited that certain ideas can't be easily expressed. For example languages that lac k floating point arithmetic are inappropriate for scientific com­ putations. Languages such as Basic and Fortran that lack recur­ sion are unsuitable for text processing or systems programming. Sometimes a programming language is useable for a certain appli­ cation but it is far from ideal. A good example is the difficulty of writing large programs in pure Pascal. Pascal is a poor language for large jobs because it lacks facilities for partitioning a program viii Preface 6< ; ~~~~er 0\ Sheet Metal Tube /" 0 (to Affix Eraser to Shaft) ~ Hollow Wooden Shaft A Lead Core Figure 1. An exploded diagram. into separate pieces that can be developed independently.