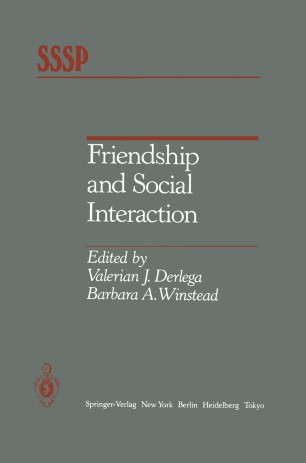 A neglected topic in the field of personal relationships has been the study of friendships. Social psychologists have studied how and why individuals are attracted to one another and the processes of interaction during initial encounters, but they have not paid much attention to ongoing friend­ ships. A major goal of the present volume is to develop theories and integrate research on the development and maintenance of friendships. Another major goal is to build bridges between social psychologists and other social scientists by presenting an interdisciplinary approach. Although a majority of the contributors are social psychologists, other authors include sociol­ ogists as well as developmental, personality, and clinical psychologists. The chapters also present research on friendship based on a wide range of research methodologies, including laboratory research as well as longi­ tudinal, naturalistic, and clinical studies. Hence, the book incorporates a variety of conceptual and methodological approaches that should con­ tribute to a cross-fertilization of ideas among disciplines. The first chapter, by Barbara A. Winstead and Valerian J. Derlega, provides an overview of theory and research on friendship. The second chapter, by Daniel Perlman and Beverley Fehr, provides a summary and conceptual critique of social psychological theories of social attraction that are relevant to the study of friendship. Adopting a developmental approach, Duane Buhrmester and Wyndol Furman, in Chapter 3, demonstrate the particular importance of friendship during middle childhood and adolescence in fulfilling interpersonal needs.