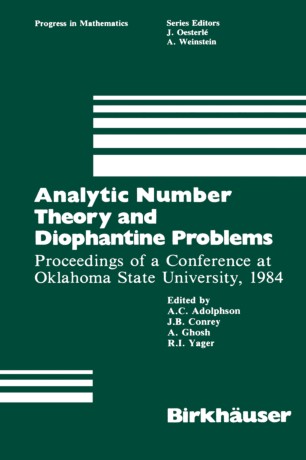 Proceedings of a Conference at Oklahoma State University, 1984

Part of the Progress in Mathematics book series (PM, volume 70)

A conference on Analytic Number Theory and Diophantine Problems was held from June 24 to July 3, 1984 at the Oklahoma State University in Stillwater. The conference was funded by the National Science Foundation, the College of Arts and Sciences and the Department of Mathematics at Oklahoma State University. The papers in this volume represent only a portion of the many talks given at the conference. The principal speakers were Professors E. Bombieri, P. X. Gallagher, D. Goldfeld, S. Graham, R. Greenberg, H. Halberstam, C. Hooley, H. Iwaniec, D. J. Lewis, D. W. Masser, H. L. Montgomery, A. Selberg, and R. C. Vaughan. Of these, Professors Bombieri, Goldfeld, Masser, and Vaughan gave three lectures each, while Professor Hooley gave two. Special sessions were also held and most participants gave talks of at least twenty minutes each. Prof. P. Sarnak was unable to attend but a paper based on his intended talk is included in this volume. We take this opportunity to thank all participants for their (enthusiastic) support for the conference. Judging from the response, it was deemed a success. As for this volume, I take responsibility for any typographical errors that may occur in the final print. I also apologize for the delay (which was due to the many problems incurred while retyping all the papers). A. special thanks to Dollee Walker for retyping the papers and to Prof. W. H. Jaco for his support, encouragement and hard work in bringing the idea of the conference to fruition.