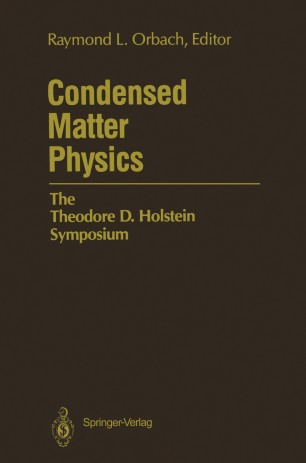 Theodore David Holstein died May 8, 1985, at the age of 69. His research career covered 46 years. His contributions have been seminal throughout this period, beginning with his first papers with H. Primakoff in 1939 and extending to the year of his death. "Ted" earned his Ph. D. in physics from New York University in 1940, after earning his Master's degree from Columbia University in 1936 and his B. S. from N. Y. U. in 1935. After receiving recognition while he was a graduate student for his contributions to the atomic theory of magnetism, he participated in the development of radar at the Westinghouse Research Laboratories, where he was a research physicist from 1941 to 1959. He taught on the faculty of the University of Pittsburgh from 1959 to 1965. He joined the Physics Department of the Uni­ versity of California, Los Angeles, where he remained until his death. Ted is survived by his wife Beverlee, his daughter Lonna Smith, his son Stuart, and his grandson Andy Smith. Ted received many prestigious awards and honors, including membership in the National Academy of Sciences and the American Academy of Arts and Sci­ of ences. He received a von Humboldt fellowship for research at the University Regensburg in the Federal Republic of Germany. The Theodore D.