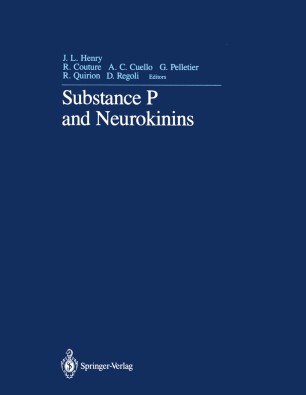 Sarajevo was the site of the first international meeting on substance P. It was held in 1961, thirty years after the first report of the discovery of substance P by Von Euler and Gaddum. The proceedings which follow are from a symposium held twenty-five years after the first meeting. These twenty-five years have seen a vast expansion in this field ofresearch. This family of peptides now includes a number of different mammalian and non-mammalian related peptides. Beyond the early physiological and pharmacological studies, there is important new information coming from the full spectrum of disciplines in the basic medical sciences, including molecular biology, which has given us important insights into the biosynthetic mechanisms of origin of these peptides. Montreal was chosen as the site for the 1986 meeting. The name given to it was "Sub­ stance P & Neurokinins-Montreal '86." This name was modelled after the one held in Dublin in 1982, but neurokinins were added to acknowledge the broader family of peptides. The meeting was held as a Satellite Symposium of the XXX International Congress of the International Union of Physiological Sciences in Vancouver. The venue was McGill University, and the dates were 21-23 July, 1986.