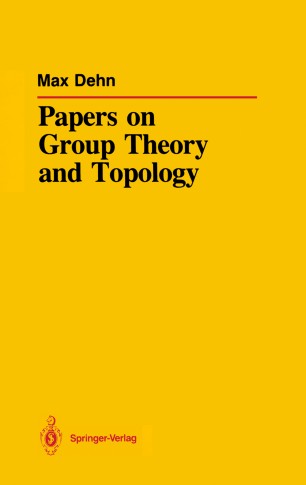 Papers on Group Theory and Topology

The work of Max Dehn (1878-1952) has been quietly influential in mathematics since the beginning of the 20th century. In 1900 he became the first to solve one of the famous Hilbert problems (the third, on the decomposition of polyhedra), in 1907 he collaborated with Heegaard to produce the first survey of topology, and in 1910 he began publishing his own investigations in topology and combinatorial group theory. His influence is apparent in the terms Dehn's algorithm, Dehn's lemma and Dehn surgery (and Dehnsche Gruppenbilder, generally known in English as Cayley diagrams), but direct access to his work has been difficult. No edition of his works has been produced, and some of his most important results were never published, at least not by him. The present volume is a modest attempt to bring Dehn's work to a wider audience, particularly topologists and group theorists curious about the origins of their subject and interested in mining the sources for new ideas. It consists of English translations of eight works : five of Dehn's major papers in topology and combinatorial group theory, and three unpublished works which illuminate the published papers and contain some results not available elsewhere. In addition, I have written a short introduction to each work, summarising its contents and trying to establish its place among related works of Dehn and others, and I have added an appendix on the Dehn-Nielsen theorem (often known simply as Nielsen's theorem) .