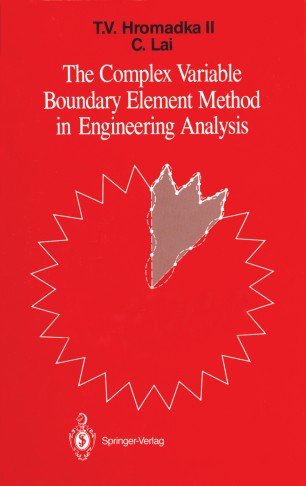 The Complex Variable Boundary Element Method (CVBEM) has emerged as a new and effective modeling method in the field of computational mechanics and hydraulics. The CVBEM is a generalization of the Cauchy integral formula into a boundary integral equation method. The model­ ing approach by boundary integration, the use of complex variables for two-dimensional potential problems, and the adaptability to now-popular microcomputers are among the factors that make this technique easy to learn, simple to operate, practical for modeling, and efficient in simulating various physical processes. Many of the CVBEM concepts and notions may be derived from the Analytic Function Method (AFM) presented in van der Veer (1978). The AFM served as the starting point for the generalization of the CVBEM theory which was developed during the first author's research engagement (1979 through 1981) at the University of California, Irvine. The growth and expansion of the CVBEM were subsequently nurtured at the U. S. Geological Survey, where keen interest and much activity in numerical modeling and computational mechanics-and-hydraulics are prevalent. Inclusion of the CVBEM research program in Survey's computational-hydraulics projects, brings the modeling researcher more uniform aspects of numerical mathematics in engineering and scientific problems, not to mention its (CVBEM) practicality and usefulness in the hydrologic investigations. This book is intended to introduce the CVBEM to engineers and scientists with its basic theory, underlying mathematics, computer algorithm, error analysis schemes, model adjustment procedures, and application examples.