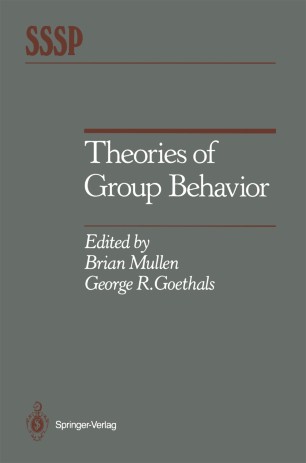 In the fall of 1983, we began to organize a symposium entitled "General Social Psychological Theories of Group Behavior." Our goal was to encourage the extension and application of basic current social psychology to group behavior. The symposium was presented in the spring of 1984 at the Eastern Psychological Association convention in Baltimore and the interest that it generated led to discussions with colleagues and friends about similar efforts by social psychologists, eventually resulting in the present book. Some clarification about the contents is in order. First, the theories presented here are clearly social psychological in scope and level of analysis, as discussed in the Introduction (Chapter 1). However, we are not trying to encompass sociological, anthropological, political, or historical theoretical approaches to group behavior. Second, while the theories comprise a wide-ranging and representative, if not quite exhaustive, selection of social psychological theories of group behavior, there are some interesting and general perspectives that are not represented. For example, one perspective that is conspicuous by its absence is some variant of learning theory. Aside from the rare, notable exception (e.g., Buss, 1979), little work currently is being done on group behavior from a learning theoretic perspective. Our inclusion or exclusion of a theory reflects our judgment regarding its currency and accessibility to social psychological researchers.