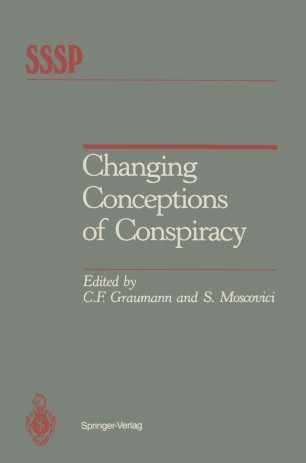 The contents of the first two volumes were, we gladly admit, at once more familiar and easier to handle. We were concerned with mass and leadership psychology, two factors that we know from social and political life. They have been much studied and we can clearly trace their evolution. However, since actions by masses and leaders also have an intellectual and emotional side, we were obliged, in some way or other, to deal with this topic as well. It was obviously necessary, it seemed to us, to approach this study from a new and significant angle. One cannot escape the realiza­ tion that "conspiracy theory" has played, and continues to play, a central role in our epoch, and has had very serious consequences. The obsession with conspiracy has spread to such an extent that it continuously crops up at all levels of society. The fol­ lowing paradox must be striking to anyone: In the past, society was governed by a small number of men, at times by one individual, who, within traditional limits, imposed his will on the multitude. Plots were effective: By eliminating these individuals and their families, one could change the course of events. Today, this is no longer the case. Power is divided among parties and extends throughout society. Power flows, changes hands, and affects opinion, which no one controls and no one represents entirely.