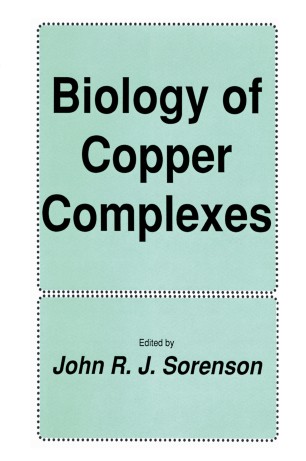 In 1928, it was discovered that copper was essential for normal human metabolism. Ten years later, 1938, it was observed that patients with rheumatoid arthritis had a higher than normal serum copper concentration, which returned to normal wi th remission of this disease. Thirteen years later, it was found that copper complexes were effective in treating arthritic diseaseS. The first report that copper complexes had antiinflammatory activity in an animal model of in­ flammation appeared twenty-two years after the discovery of essen­ tiality. In 1976, it was suggested that the active forms of the anti­ arthritic drugs are their copper complexes formed in vivo. This suggestion was confirmed and extended in the interim with over 1000 recent publications, and many of these were addressed in the proceed­ ings of our first symposium, published in 1982. The present symposium was organized to present new normal physiological, nutritional, and biochemical aspects of essential metal­ loelement metabolism as well as variations in metabolism associated with disease states. In addition new data concerning antimicrobial, antiinflammatory, antiulcer, anticancer, anticarcinogenic, analgesic, and radioprotectant activities of copper complexes were presented. These activities are consistent with the notion that they represent the facilitation of normal copper-dependent metabolic processes in dis­ ease states. The presentations and interactive discussions that fol­ lowed are contained in these proceedings. John R. J. Sorenson Dedication These proceedings are dedicated to those who made this truly memorable scientific and social Arkansas experience possible.