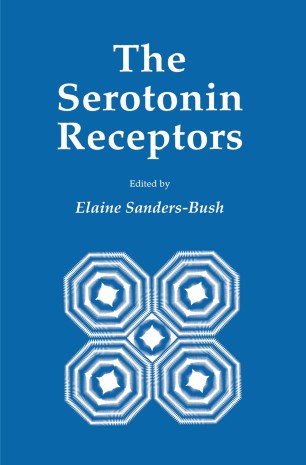 Part of the The Receptors book series (REC)

Serotonin (5-HT) was isolated and chemically characterized nearly four decades ago, and is now generally accepted to function as a neurotransmitter and neuromodulatory agent. Early research focused on the measurement of concentrations, synthesis, and metabolism of 5-HT, and only recently has the focus shifted to characterization of 5-HT receptors. Gaddum and Picarelli first sug­ gested in 1957 that the effect of 5-HT in the guinea pig ileum is mediated by two pharmacologically distinguishable receptors; however, the possibility of dual5-HT receptors was not explored systematically or successfully until the past decade. It is now clear that more, perhaps many more, subclasses of 5-HT receptors exist. The purpose of this book is to provide an up-to-date report on 5-HT receptors. This is a difficult task considering the astonishing speed at which research in this field is expanding. As the first of what we can expect to be a steady stream of monographs focusing on 5-HT receptors, the book confirms that we are in an exciting time in the history of 5-HT. For those of us who have been work­ ing on 5-HT for many years, our dream of equal progress and recognition with the more extensively studied catecholamines is finally being realized. We now have a Serotonin Club that held its first international scientific meeting in 1987, and several more international meetings are in the planning stages.