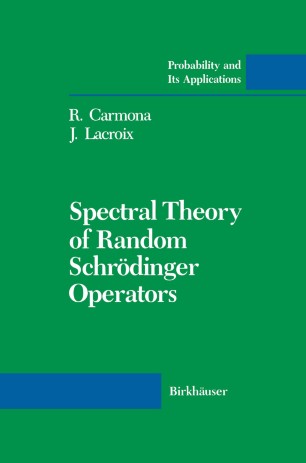 Since the seminal work of P. Anderson in 1958, localization in disordered systems has been the object of intense investigations. Mathematically speaking, the phenomenon can be described as follows: the self-adjoint operators which are used as Hamiltonians for these systems have a ten­ dency to have pure point spectrum, especially in low dimension or for large disorder. A lot of effort has been devoted to the mathematical study of the random self-adjoint operators relevant to the theory of localization for disordered systems. It is fair to say that progress has been made and that the un­ derstanding of the phenomenon has improved. This does not mean that the subject is closed. Indeed, the number of important problems actually solved is not larger than the number of those remaining. Let us mention some of the latter: • A proof of localization at all energies is still missing for two dimen­ sional systems, though it should be within reachable range. In the case of the two dimensional lattice, this problem has been approached by the investigation of a finite discrete band, but the limiting pro­ cedure necessary to reach the full two-dimensional lattice has never been controlled. • The smoothness properties of the density of states seem to escape all attempts in dimension larger than one. This problem is particularly serious in the continuous case where one does not even know if it is continuous.