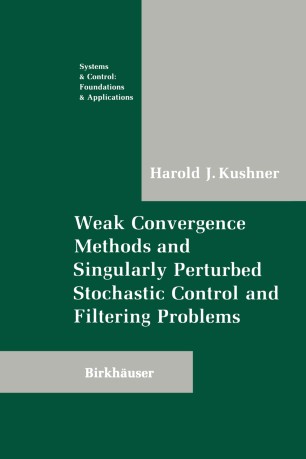 The book deals with several closely related topics concerning approxima­ tions and perturbations of random processes and their applications to some important and fascinating classes of problems in the analysis and design of stochastic control systems and nonlinear filters. The basic mathematical methods which are used and developed are those of the theory of weak con­ vergence. The techniques are quite powerful for getting weak convergence or functional limit theorems for broad classes of problems and many of the techniques are new. The original need for some of the techniques which are developed here arose in connection with our study of the particular applica­ tions in this book, and related problems of approximation in control theory, but it will be clear that they have numerous applications elsewhere in weak convergence and process approximation theory. The book is a continuation of the author's long term interest in problems of the approximation of stochastic processes and its applications to problems arising in control and communication theory and related areas. In fact, the techniques used here can be fruitfully applied to many other areas. The basic random processes of interest can be described by solutions to either (multiple time scale) Ito differential equations driven by wide band or state dependent wide band noise or which are singularly perturbed. They might be controlled or not, and their state values might be fully observable or not (e. g. , as in the nonlinear filtering problem).