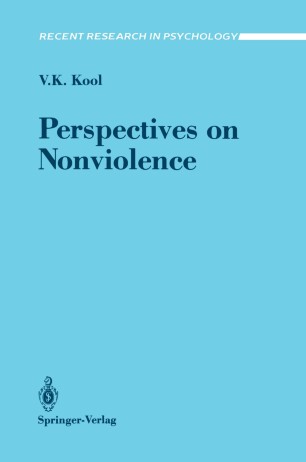 Paddock has referred to societies as "anti-violent" that Inhibit the expressIon of aggresSion. In his book Violence and Aggression, KE. Moyer nas made a brief but interesting comparison of several violent and nonviolent cultures. Whereas studies of violence have ranged from genetic, cultural to Situation effects, and have been pursued through empirical and nonempirical methods over the past several decades, nonviolence did not become a favorite area of study among social scientists. Although it is impossible to make a complete list of the various reasons for the lack of interest among social scientists on this subject, it is generally believed that a lack of understanding of the concept and a failure to either develop or apply adequate methods are to Olame. Therefore we are not surprized that nonviolence has remained, by and large, a favorite topic among religious thinkers and leaders only. A good example of how people have difficulty understanding the concept of nonviolence came to me when I delivered a lecture to a group of political science students several years ago. I experienced similar problems when I spoke to the history and political science professors. Subsequent dialogues with faculty members in other disciplines convinced me that our perspectives on nonVIolence were not commonly clear to all of us. or course, most of us did agree on one thing--that Is, there Is a distinct difference separating Eastern from Western views of nonviolence.