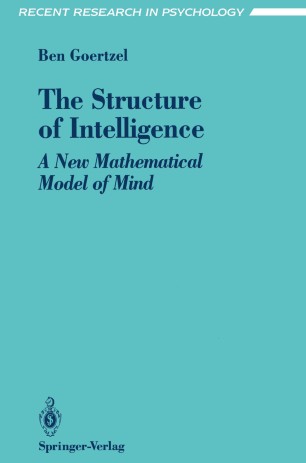 The Structure of Intelligence

A New Mathematical Model of Mind

0. 0 Psychology versus Complex Systems Science Over the last century, psychology has become much less of an art and much more of a science. Philosophical speculation is out; data collection is in. In many ways this has been a very positive trend. Cognitive science (Mandler, 1985) has given us scientific analyses of a variety of intelligent behaviors: short-term memory, language processing, vision processing, etc. And thanks to molecular psychology (Franklin, 1985), we now have a rudimentary understanding of the chemical processes underlying personality and mental illness. However, there is a growing feeling-particularly among non-psychologists (see e. g. Sommerhoff, 1990) - that, with the new emphasis on data collection, something important has been lost. Very little attention is paid to the question of how it all fits together. The early psychologists, and the classical philosophers of mind, were concerned with the general nature of mentality as much as with the mechanisms underlying specific phenomena. But the new, scientific psychology has made disappointingly little progress toward the resolution of these more general questions. One way to deal with this complaint is to dismiss the questions themselves. After all, one might argue, a scientific psychology cannot be expected to deal with fuzzy philosophical questions that probably have little empirical signifi­ cance. It is interesting that behaviorists and cognitive scientists tend to be in agreement regarding the question of the overall structure of the mind.