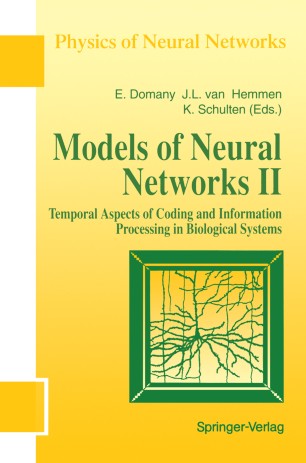 Temporal Aspects of Coding and Information Processing in Biological Systems

Since the appearance of Vol. 1 of Models of Neural Networks in 1991, the theory of neural nets has focused on two paradigms: information coding through coherent firing of the neurons and functional feedback. Information coding through coherent neuronal firing exploits time as a cardinal degree of freedom. This capacity of a neural network rests on the fact that the neuronal action potential is a short, say 1 ms, spike, localized in space and time. Spatial as well as temporal correlations of activity may represent different states of a network. In particular, temporal correlations of activity may express that neurons process the same "object" of, for example, a visual scene by spiking at the very same time. The traditional description of a neural network through a firing rate, the famous S-shaped curve, presupposes a wide time window of, say, at least 100 ms. It thus fails to exploit the capacity to "bind" sets of coherently firing neurons for the purpose of both scene segmentation and figure-ground segregation. Feedback is a dominant feature of the structural organization of the brain. Recurrent neural networks have been studied extensively in the physical literature, starting with the ground breaking work of John Hop­ field (1982).