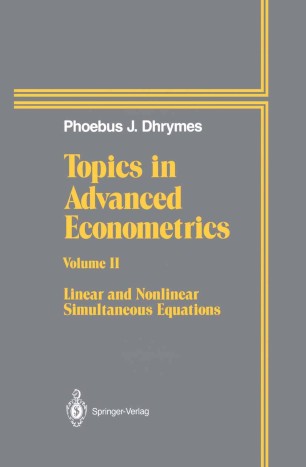 This book is intended for second year graduate students and professionals who have an interest in linear and nonlinear simultaneous equations mod­ els. It basically traces the evolution of econometrics beyond the general linear model (GLM), beginning with the general linear structural econo­ metric model (GLSEM) and ending with the generalized method of mo­ ments (GMM). Thus, it covers the identification problem (Chapter 3), maximum likelihood (ML) methods (Chapters 3 and 4), two and three stage least squares (2SLS, 3SLS) (Chapters 1 and 2), the general nonlinear model (GNLM) (Chapter 5), the general nonlinear simultaneous equations model (GNLSEM), the special ca'3e of GNLSEM with additive errors, non­ linear two and three stage least squares (NL2SLS, NL3SLS), the GMM for GNLSEIVl, and finally ends with a brief overview of causality and re­ lated issues, (Chapter 6). There is no discussion either of limited dependent variables, or of unit root related topics. It also contains a number of significant innovations. In a departure from the custom of the literature, identification and consistency for nonlinear models is handled through the Kullback information apparatus, as well as the theory of minimum contrast (MC) estimators. In fact, nearly all estimation problems handled in this volume can be approached through the theory of MC estimators. The power of this approach is demonstrated in Chapter 5, where the entire set of identification requirements for the GLSEM, in an ML context, is obtained almost effortlessly, through the apparatus of Kullback information.