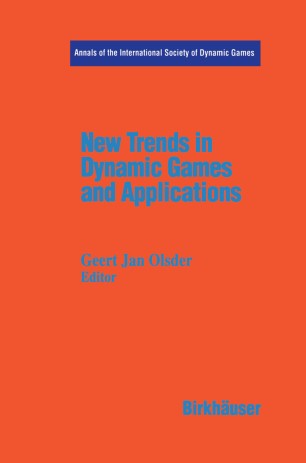 Part of the Annals of the International Society of Dynamic Games book series (AISDG, volume 3)

The theory of dynamic games is very rich in nature and very much alive! If the reader does not already agree with this statement, I hope he/she will surely do so after having consulted the contents of the current volume. The activities which fall under the heading of 'dynamic games' cannot easily be put into one scientific discipline. On the theoretical side one deals with differential games, difference games (the underlying models are described by differential, respec­ tively difference equations) and games based on Markov chains, with determin­ istic and stochastic games, zero-sum and nonzero-sum games, two-player and many-player games - all under various forms of equilibria. On the practical side, one sees applications to economics (stimulated by the recent Nobel prize for economics which went to three prominent scientists in game theory), biology, management science, and engineering. The contents of this volume are primarily based on selected presentations made at the Sixth International Symposium on Dynamic Games and Applica­ tions, held in St Jovite, Quebec, Canada, 13-15 July 1994. Every paper that appears in this volume has passed through a stringent reviewing process, as is the case with publications for archival technical journals. This conference, as well as its predecessor which was held in Grimentz, 1992, took place under the auspices of the International Society of Dynamic Games (ISDG), established in 1990. One of the activities of the ISDG is the publication of these Annals. The contributions in this volume have been grouped around five themes.