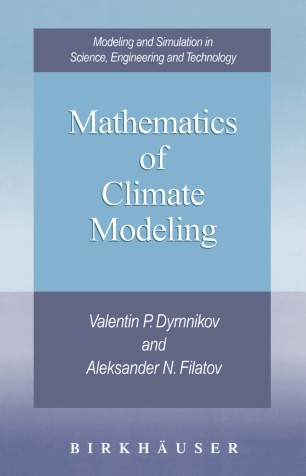 Part of the Modeling and Simulation in Science, Engineering, & Technology book series (MSSET)

The present monograph is dedicated to a new branch of the theory of climate, which is titled by the authors, "Mathematical Theory of Climate. " The foundation of this branch is the investigation of climate models by the methods of the qUalitative theory of differential equa­ tions. In the Russian edition the book was named "Fundamentals of the Mathematical Theory of Climate. " Respecting the recommenda­ tions of Wayne Yuhasz (we are truly grateful to him for this advice), we named the English edition of the book "Mathematics of Climate Modelling. " This title appears to be more appropriate, since the con­ structive results of the theory are at present preliminary and have not been fully tested with experiments in climate modelling. This branch of science is yet developing and its practical results will be obtained only in the near future. Nevertheless, we want to keep the terminology which we have used in the introduction to the Russian edition of the book, since the authors hope that this term will be accepted by the scientific community for identification of a given branch of climate theory. On preparing the English edition, new ideas were established con­ necting some significant new research results obtained by the author. We are deeply grateful to G. Marchuk for continual encourage­ ment of this scientific enterprise and fruitful discussions, to our young colleagues A. Gorelov, E. Kazantsev, A. Gritsun, and A.