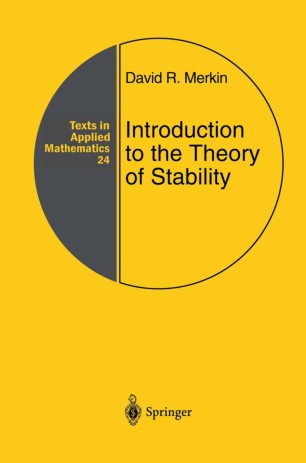 Introduction to the Theory of Stability

Many books on stability theory of motion have been published in various lan­ guages, including English. Most of these are comprehensive monographs, with each one devoted to a separate complicated issue of the theory. Generally, the examples included in such books are very interesting from the point of view of mathematics, without necessarily having much practical value. Usually, they are written using complicated mathematical language, so that except in rare cases, their content becomes incomprehensible to engineers, researchers, students, and sometimes even to professors at technical universities. The present book deals only with those issues of stability of motion that most often are encountered in the solution of scientific and technical problems. This allows the author to explain the theory in a simple but rigorous manner without going into minute details that would be of interest only to specialists. Also, using appropriate examples, he demonstrates the process of investigating the stability of motion from the formulation of a problem and obtaining the differential equations of perturbed motion to complete analysis and recommendations. About one fourth of the examples are from various areas of science and technology. Moreover, some of the examples and the problems have an independent value in that they could be applicable to the design of various mechanisms and devices. The present translation is based on the third Russian edition of 1987.