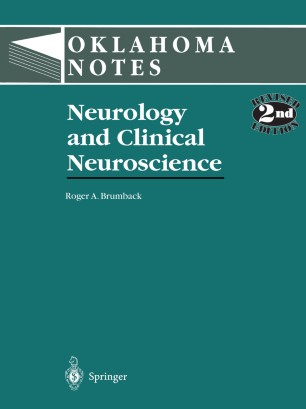 The United States Congress has designated the 1990s as the "Decade of the Brain" in recognition of the major importance of neurology and the other neurosciences in the health and well-being of Americans. It has been suggested that as many as 20% of all patients seeking medical treatment have neurologic problems, either as the presenting complaint or as an associated condition complicating the primary illness. Thus, it is fitting that Springer-Verlag should acknowledge the prominence of this medical specialty area by devoting an entire volume of the Oklahoma Notes series to neurology and clinical neuroscience. Of course, this text is an outline overview and does not attempt to provide ency­ clopedic coverage of neurology (the student desiring a comprehensive review of the field may wish to seek in the library the 60 + volumes in the series Handbook of Clinical Neurology edited by Pierre J. Vinken and George W. Bruyn). However, the information selected for inclusion in this volume of the Oklahoma Notes series remains true to the goal of the whole series-only materials vital in both the general clinical practice of medicine and to answer questions on the all-important United States Medical Licensing Examination have been incorporated in the text. Roger A. Brumback, M.D.