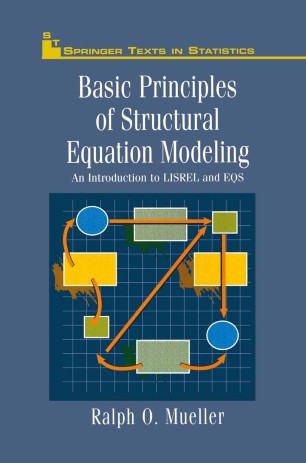 An Introduction to LISREL and EQS

During the last two decades, structural equation modeling (SEM) has emerged as a powerful multivariate data analysis tool in social science research settings, especially in the fields of sociology, psychology, and education. Although its roots can be traced back to the first half of this century, when Spearman (1904) developed factor analysis and Wright (1934) introduced path analysis, it was not until the 1970s that the works by Karl Joreskog and his associates (e. g. , Joreskog, 1977; Joreskog and Van Thillo, 1973) began to make general SEM techniques accessible to the social and behavioral science research communities. Today, with the development and increasing avail­ ability of SEM computer programs, SEM has become a well-established and respected data analysis method, incorporating many of the traditional analysis techniques as special cases. State-of-the-art SEM software packages such as LISREL (Joreskog and Sorbom, 1993a,b) and EQS (Bentler, 1993; Bentler and Wu, 1993) handle a variety of ordinary least squares regression designs as well as complex structural equation models involving variables with arbitrary distributions. Unfortunately, many students and researchers hesitate to use SEM methods, perhaps due to the somewhat complex underlying statistical repre­ sentation and theory. In my opinion, social science students and researchers can benefit greatly from acquiring knowledge and skills in SEM since the methods-applied appropriately-can provide a bridge between the theo­ retical and empirical aspects of behavioral research.