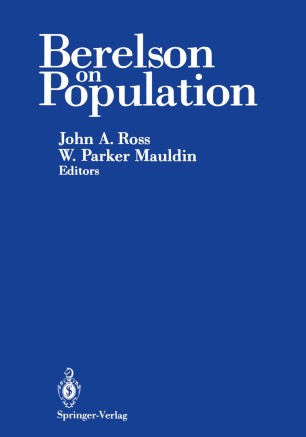 Bernard (Barney) Berelson had a major influence in the application of social science concepts and methods to population policy during the period from 1962 to 1980. This was the period when concern with population problems spread from a relatively small group of scholars and population activists to a much larger, diverse, international group of political and intellectual leaders and to the general public as well. There was an exponential growth in the number of scholars and service personnel in vari­ ous population and family specialities in this period. Barney came into the field with his appointment as Director of the Com­ munication Research Program of The Population Council in 1962. He had no previous training or experience in demography. Frank Notestein, Presi­ dent of The Population Council at the time, had the wisdom to appreciate the value and relevance of Barney's itTIpressive background in communica­ tion research and other social science areas, as well as his creative mind and leadership qualities. His influence on the Council's rapidly expanding program was so immediate and impressive that within a year, he was named Vice President. When Frank Notestein retired in 1968, Barney became President, a post he held for 6 very productive years.