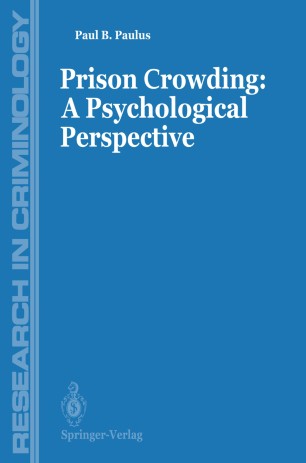 This volume is a summary of a 1S-year effort to determine the effects of prison crowding and their relationship to the broader realm of crowding phenomena and theories. Although the writing of this volume was for the most part a solitary effort, the data and ideas it is based on were mostly the result of a collaborative effort with Verne Cox and Garvin McCain. Their schedules limited their ability to contribute to this volume, but they provided much constructive feedback and assistance. Cox also wrote a preliminary draft of Chapter 3, and both McCain and Cox made major contributions to Chapter S and assisted with several other chapters. I am greatly indebted to these two fine scholars for their efforts and support over the course of our joint research endeavors. In recognition of this fact, the pronoun "we" is used throughout this volume. This research would not have been possible without the cooperation and support of thousands of inmates and hundreds of prison officials. The un­ conditional support throughout the project from Director Norman Carlson and former regional research director Jerome Mabli, both of the Federal Bureau of Prisons, is also greatly appreciated. Thanks are due to the National Institute of Justice for financial support during various phases of this project. The support of John Spevacek of the Institute was indispens­ able. Funds were also provided by the Hogg Foundation, U. S. Department of Justice-Civil Rights Division, and the University of Texas at Arlington.