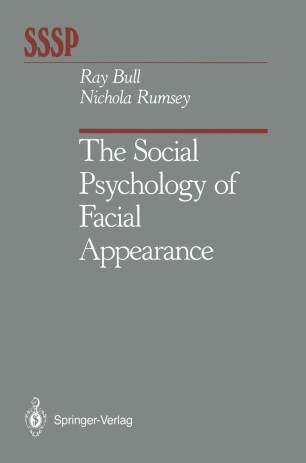 The Social Psychology of Facial Appearance

Several years ago Coleman (1981) reported that in 1979 one of the many in­ ternational cosmetics companies had an annual sales figure of $2. 38 billion, nearly 1. 25 million sales representatives, and over 700 products, the majority of these being for the face. Cash and Cash (1982) noted that in 1979 U. S. consumers spent over $4 million on cosmetic products. They stated that, "Although this practice would seem to be a fascinating aspect of human be­ havior on the basis of its generality and resilience, social-behavioral scientists have largely ignored the phenomenon so plainly (or pleasingly) in front of their eyes. " Why should people be so concerned with their facial appearance? Many psychologists have argued (e. g. , Kleck & Rubenstein, 1975) not only that facial information is usually the first that is available to the perceiver, but also that it is continuously available during social interaction. Maruyama and Miller (1981) stated that "appearance is often the first dimension upon which a stranger can be evaluated. Since people tend to see others as integrated and consistent units, rather than as collections of situation-specific behaviors, a potent and immediately evident basis for an evaluation, such as physical appearance, should intrude into and affect any overall and subsequent evalua­ tion.