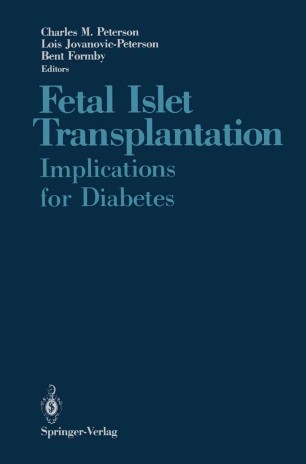 The breadth of research efforts represented by the many excellent papers in these proceedings is an eloquent testimonial to the idea of one man­ Dr. Josiah Brown-to whose memory this volume is dedicated. His tragic and unexpected loss in a swimming accident in August 1985 brought to an abrupt close a long and distinguished career as a physician and scientist. The possibility of using fetal pancreas tissue for transplantation into insulin-deficient diabetic recipients had intrigued Dr. Brown for several years prior to 1972, when he began in earnest to assemble a research team to explore this idea in detail. He felt that improvements in the formulation and administration of insulin (even the later recombinant human insulin) had taken us about as far as we could go in treating diabetes, and that methods for achieving complete cures must be explored. Numerous advantages of the fetal pancreas quickly became apparent, and were explored scientifically by Dr. Brown and his group. Transplanted pancreas tissue from a fetal donor of the appropriate developmental stage engrafts quickly, and can reverse diabetes very efficiently (1-3). By shunting the venous'drainage of the graft into the hepatic portal vein, a single pancreatic rudiment can, in time, provide enough insulin to restore normoglycemia and urine volume in a diabetic adult recipient (4). As with fetal pancreas rudiments in culture, transplanted fetal pancreas tissue loses its exocrine character, while continuing to develop and maintain endocrine function.