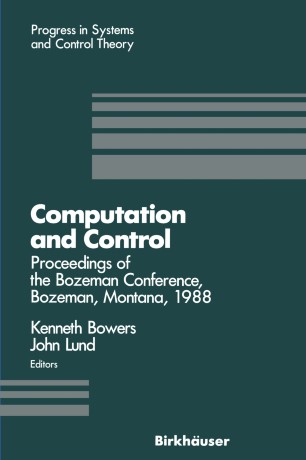 Part of the Progress in Systems and Control Theory book series (PSCT, volume 1)

The problem of developing a systematic approach to the design of feed­ back strategies capable of shaping the response of complicated dynamical control systems illustrates the integration of a wide variety of mathemat­ ical disciplines typical of the modern theory of systems and control. As a concrete example, one may consider the control of fluid flow across an airfoil, for which recent experiments indicate the possibility of delaying the onset of turbulence by controlling viscosity through thermal actuators located on the airfoil. In general, there are two approaches to the con­ trol of such a complica. ted process, the development of extremely detailed models of the process followed by the derivation of a more "dedicated" feed­ back law or the development of a more simple model class followed by the derivation of control laws which are more robust to unmodelled dynamics and exogeneous disturbances. In either approach, the two twin themes of approximation and computation play a significant role in the derivation and implementation of resulting control laws. And there is no doubt that the cross-fertilization between these twin themes and control theory will increase unabated throughout the next decade, not just as an important component of design and implementation of control laws but also as a source of new problems in computational mathematics. In this volume, we present a collection of papers which were deliv­ ered at the first Bozeman Conference on Computation and Control, held at Montana State University on August 1-11, 1988.