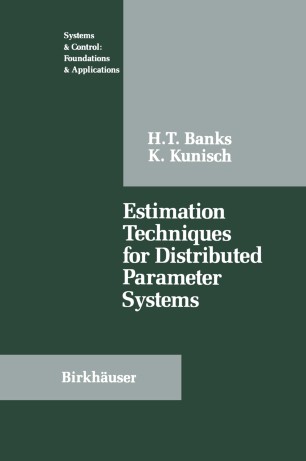 The research detailed in this monograph was originally motivated by our interest in control problems involving partial and delay differential equations. Our attempts to apply control theory techniques to such prob­ lems in several areas of science convinced us that in the need for better and more detailed models of distributed/ continuum processes in biology and mechanics lay a rich, interesting, and challenging class of fundamen­ tal questions. These questions, which involve science and mathematics, are typical of those arising in inverse or parameter estimation problems. Our efforts on inverse problems for distributed parameter systems, which are infinite dimensional in the most common realizations, began about seven years ago at a time when rapid advances in computing capabilities and availability held promise for significant progress in the development of a practically useful as well as theoretically sound methodology for such problems. Much of the research reported in our presentation was not begun when we outlined the plans for this monograph some years ago. By publishing this monograph now, when only a part of the originally intended topics are covered (see Chapter VII in this respect), we hope to stimulate the research and interest of others in an area of scientific en­ deavor which has exceeded even our optimistic expectations with respect to excitement, opportunity, and stimulation. The computer revolution alluded to above and the development of new codes allow one to solve rather routinely certain estimation problems that would have been out of the question ten years ago.