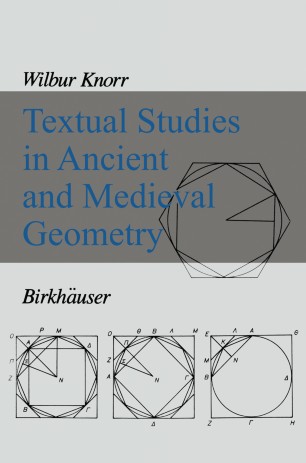 For textual studies relating to the ancient mathematical corpus the efforts by the Danish philologist, 1. L. Heiberg (1854-1928), are especially significant. Beginning with his doctoral dissertation, Quaestiones Archimedeae (Copen­ hagen, 1879), Heiberg produced an astonishing series of editions and critical studies that remain the foundation of scholarship on Greek mathematical 4 science. For comprehensiveness and accuracy, his editions are exemplary. In his textual studies, as also in the prolegomena to his editions, he carefully described the extant evidence, organized the manuscripts into stemmata, and drew out the implications for the state of the text. 5 With regard to his Archimedean work, Heiberg sometimes betrayed signs of the philologist's occupational disease - the tendency to rewrite a text deemed on subjective grounds to be unworthy. 6 But he did so less often than his prominent 7 contemporaries, and not as to detract appreciably from the value of his editions. In examining textual questions bearing on the Archimedean corpus, he attempted to exploit as much as possible evidence from the ancient commentators, and in some instances from the medieval translations. It is here that opportunities abound for new work, extending, and in some instances superseding, Heiberg's findings. For at his time the availability of the medieval materials was limited. In recent years Marshall Clagett has completed a mammoth critical edition of the medieval Latin tradition of Archimedes,8 while the bibliographical instruments for the Arabic tradition are in good order thanks to the work of Fuat Sezgin.