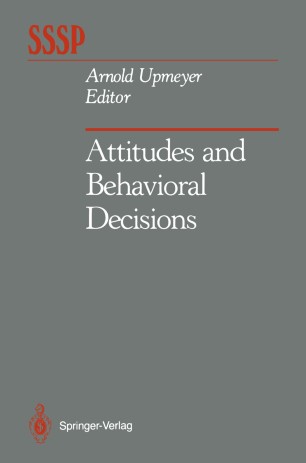 This book summarizes theoretical and empirical work that was performed in a large-scale, cross-university research project on the relationship between attitudes and behavior. The entire program has been funded by the Deutsche Forschungsgemeinschaft (DFG), an institution that operates similarly to the American National Science Foundation. In 1981 the DFGruled to release the project for a five-year period with the option to extend if th~ extension proposal would suggest a major alteration of research goals. The participants are presently in the stage of transition between the first five-year allotment and the granted extension. We feel that this is the most opportune time to summarize the development of the project for an international audience. Until now only scattered publications have existed. This book is more than just a compilation of previously published results. Rather, it is the original contributions and a substantial share of newly published empirical results that guarantee an up-to-date exposition of the entire program. The general goal of the research group is to perform basic research in attaining explanations for the relationships between attitude and behavior and to improve the predictability of current predictor models. In pursuing this goal we are not primarily interested in the immediate strategy of redefining predictor variables within the framework of the general linear statistical model. Rather, we emphasize cognitive processes and structures that predispose a person's behavior, that accompany behavior, or that change as a result of prior behavior.