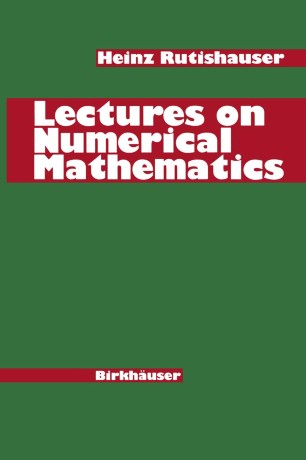 The present book is an edition of the manuscripts to the courses "Numerical Methods I" and "Numerical Mathematics I and II" which Professor H. Rutishauser held at the E.T.H. in Zurich. The first-named course was newly conceived in the spring semester of 1970, and intended for beginners, while the two others were given repeatedly as elective courses in the sixties. For an understanding of most chapters the funda­ mentals of linear algebra and calculus suffice. In some places a little complex variable theory is used in addition. However, the reader can get by without any knowledge of functional analysis. The first seven chapters discuss the direct solution of systems of linear equations, the solution of nonlinear systems, least squares prob­ lems, interpolation by polynomials, numerical quadrature, and approxima­ tion by Chebyshev series and by Remez' algorithm. The remaining chapters include the treatment of ordinary and partial differential equa­ tions, the iterative solution of linear equations, and a discussion of eigen­ value problems. In addition, there is an appendix dealing with the qd­ algorithm and with an axiomatic treatment of computer arithmetic.