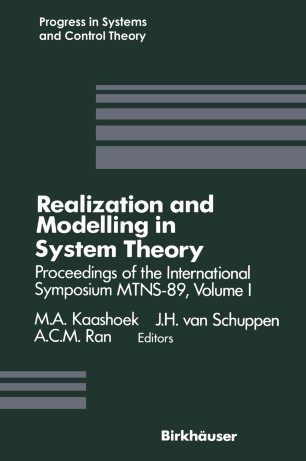 Realization and Modelling in System Theory

Proceedings of the International Symposium MTNS-89, Volume I

Part of the Progress in Systems and Control Theory book series (PSCT, volume 3)

This volume is the first of the three volume publication containing the proceedings of the 1989 International Symposium on the Mathematical Theory of Networks and Systems (MTNS-89), which was held in Amsterdam, The Netherlands, June 19-23, 1989. The International Symposia MTNS focus attention on problems from system and control theory, circuit theory and signal processing, which, in general, require application of sophisticated mathematical tools, such as from function and operator theory, linear algebra and matrix theory, differential and algebraic geometry. The interaction between advanced mathematical methods and practical engineering problems of circuits, systems and control, which is typical for MTNS, turns out to be most effective and is, as these proceedings show, a continuing source of exciting advances. The first volume contains invited papers and a large selection of other symposium presentations on the general theory of deterministic and stochastic systems with an emphasis on realization and modelling. A wide variety of recent results on approximate realization and system identification, stochastic dynamical systems, discrete event systems,- o systems, singular systems and nonstandard models IS presented. Preface vi Also a few papers on applications in hydrology and hydraulics are included. The titles of the two other volumes are: Robust Control of Linear Sys­ tems and Nonlinear Control (volume 2) and Signal Processing. Scatter­ ing and Operator Theory. and Numerical Methods (volume 3). The Editors are most grateful to the about 300 reviewers for their help in the refereeing process. The Editors thank Ms. G. Bijleveld and Ms.